Bollywood’s style- icon, actress Sonam Kapoor and Pakistan’s super-star Fawad Khan enthralled Lovely Professional University students today.  University students from LPU Schools of Fashion Technology, Journalism & Film Production interacted with them specially to know their views on fashion and films.  Both the actors spent more than one hour at the campus, and also mesmerized many thousands of students with their scintillating performances.

The chemistry between the two actors led students to the land of fairy tales. On be asked about fashion the ‘fashionista’ of Bollywood Sonam Kapoor said, “Fashions are to be followed which make you look beautiful and handsome and not those which make you look awkward. In dressing, one should not heed designers or any bad examples. One should be easy and confident in their attires.” Fawad Khan was spellbound to see the diverse, multicultural student crowd. Happy to be surrounded by so many young people, Fawad said, “I am very happy to be in India particularly among you all here in Jalandhar at LPU.”

Welcoming the great personalities from the world of Indian and Pakistani cinema, LPU Chancellor Mr Ashok Mittal wished them all the best for their future projects. Mr Mittal also asked students to learn to work hard and be persistent in the pursuit of success just like the guest duo. Sonam Kapoor has not only proved her mettle in different movies, but she has also earned undisputed recognition of being the fashion queen of Bollywood.  Her latest movie is ‘Khoobsurat’ and Pakistan’s star actor Fawad is her co-star in this much awaited film. Fawad has won critical acclaim for his true to life portrayal  of complex characters. 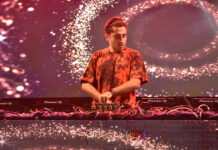