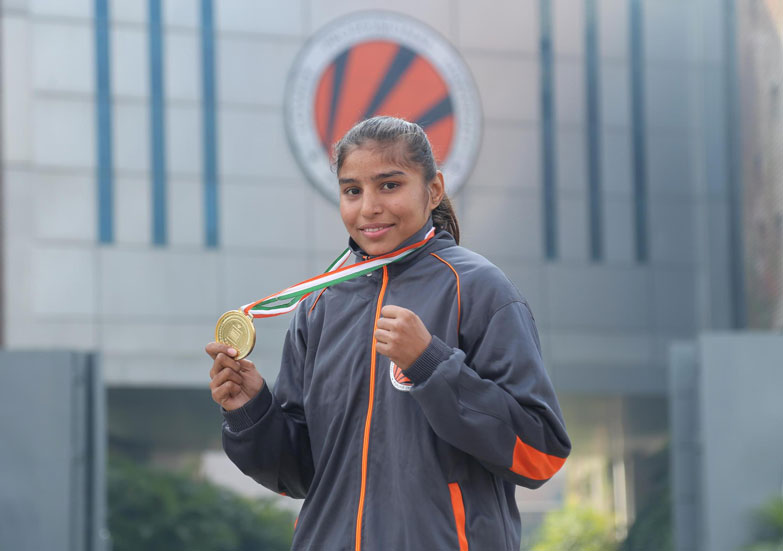 BSc 1st year student of Lovely Professional University, Manju Rani has won national ‘Gold Medal’ at 3rd Elite Women’s National Boxing Championships held in Vijayanagara (Karnataka).  Manju bagged the gold in the women’s 48 kg weight category. Manju is now slated to get training with internationally acclaimed ‘Queen-Boxer’ of India ‘Mary Kom’ and other national women boxers in New Delhi for almost one-year to further continue with her wins. She is being adjudged probably to represent India at Olympics-2020. Manju is studying at LPU on 100% scholarship including full fee concession, free accommodation, foods, and books.

In her first appearance at the nationals, Manju defeated another top boxer of the country S Kalaivani of Tamil Nadu by 4-1 in the final. Prior to this, in other four bouts, she got one bye in the first and in other three defeated top boxers of the country Rinki Dabholkar of Goa on Referee Stop Contest (RSC) point; Pooja Taukas of Railways by 5-0; and, Rajni of Uttar Pradesh again by 5-0. Five Feet, Four Inches Tall- Manju has terror in her fierce fists against all kinds and types of her rivals. LPU Chancellor Mr Ashok Mittal congratulated the golden-girl of the university and inspired her to keep on bringing more and more laurels to the nation by targeting right from now for Olympic win. 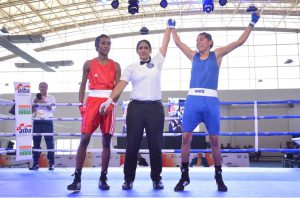 On reaching LPU Campus after her win, Manju shared: “Now my sole aim is to get training under the esteemed guidance of my ideal Mary Kom, get into the Indian Olympic contingent, win gold, and make my country, state, university and my mother and all others feel proud of me and my achievements. I am thankful to LPU management for enabling me to pursue my passion and for making my life easy. I am also indebted to my coach at LPU, Mr Liladhar, who paved my way from a small village Rithal (Rohtak) in Haryana to LPU and provided me strenuous training to be up to the mark. In fact, “Boxing provides me vigour and vitality to keep going ahead in life.” For Manju, the success saga has just begun and she wants to win a medal in the Olympics like her idol Vijender Singh. She is also admirer of former American professional boxer and WBO heavyweight title holder Lamon Brewster, who is best known for scoring knockout victory.

Manju is fatherless since her childhood; however, she is fully supported and morally boosted by her mother to keep on following her lofty dreams, and so she is determined to stand always victorious. Sharing about her final win, she says: “In finals, I hit my opponent a four-punch combination in the first round and, I knew that this was my sure win.” In a message to the girls of her age, Manju advises: “Be fit and fine by maintaining body weight as per your age, avoid fast and untimely foods, and pursue your passion in whatever form it is.” Poles apart of her boxing domain, Manju is extremely fond of painting also with deft drawings and artistic sketches.