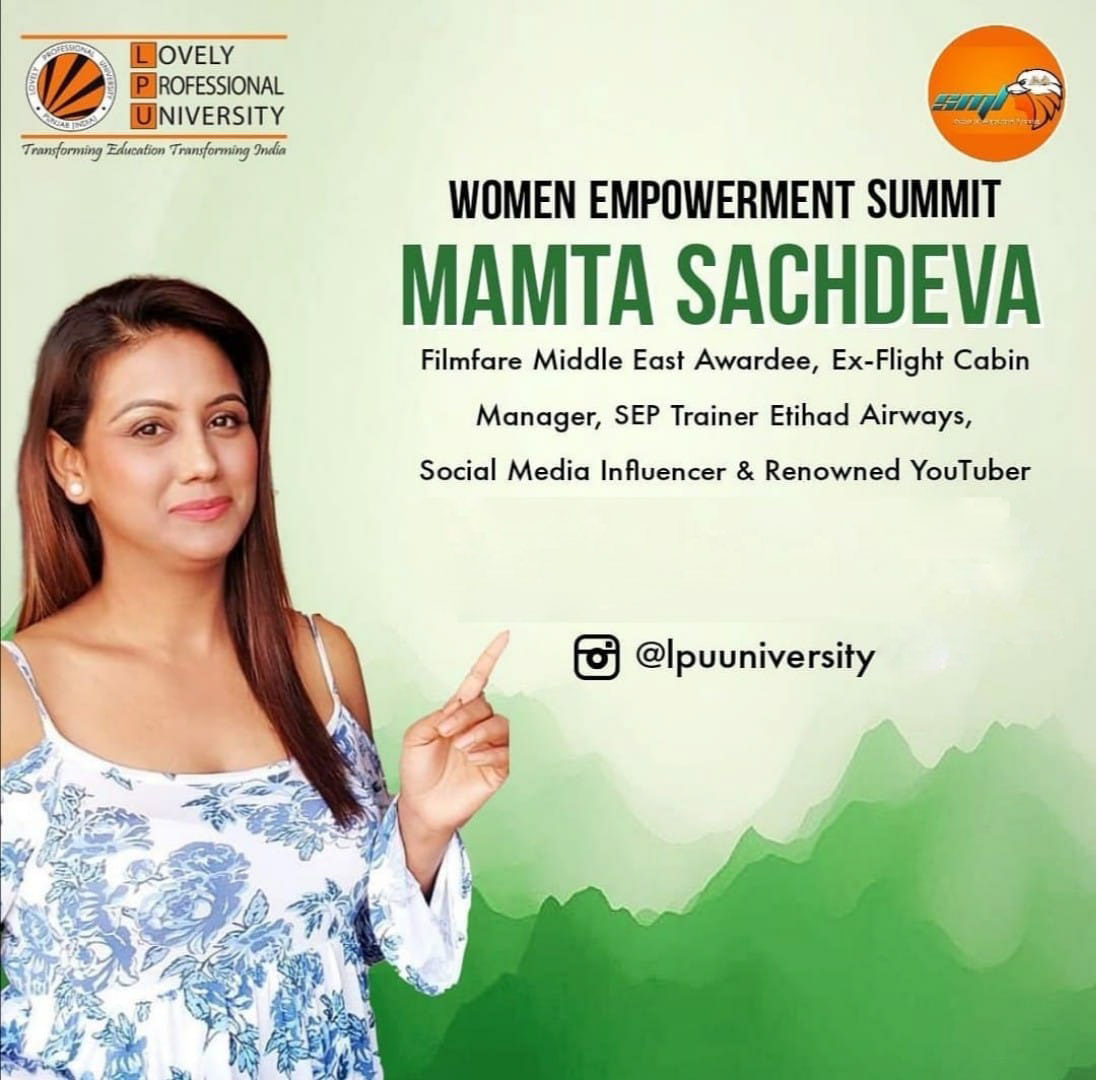 Mrs. Mamta Sachdeva, proverbial Indian YouTube personality based in UAE with over a million subscribers, Ex-Cabin Manager, and Safety & Emergency Procedures (SEP) instructor at Ethiad Airways with over 14 years of experience in the Aviation & Hospitality Industry, blessed Vertos of Lovely Professional University with her enchanting aura on 17th of April, 2021 through an online Women Empowerment Summit organized by the Society of Management Learning.

Presenting herself to one of the most diverse audiences, she narrated her journey from being a gloomy child to one of the most accomplished personages in the aviation & hospitality industry and how she overcame trivial familial hitches despite getting loathed by society.

She elaborated on how she overcame financial hiccups, despite fearing cessation of education, living under the fear of marriage, and how she overcame everything to become the enlivening Mamta Sachdeva we all know today!

She beautifully elaborated on how her can-do attitude helped her put a stopper on the mouth of society. She thanked our society for such cruel and phlegmatic treatment, as they are the reason she became so formidable and fearless. The brawls she faced in her life are excuses for many women but still, she kept on her can-do attitude, and her peerless appetite for success to achieve something remarkable.

She explained how during her childhood, she always had the desire to assist her family financially despite being grimly impoverished to fulfill this desire, she carried sacks of slippers to sell at her mother’s shop, and on festivals, she used to sell crackers, gullals, rakhis, kites, sewing clothes, arranging flowers, whatever works to assist her family financially she did everything. That justifies the reason she was so humble and kind to everyone.

As the session progressed, she explained how she became an air hostess, how an advertisement in a newspaper changed her life. She fought with her family to become an air hostess, getting no support eventually, she left her home and continued her air hostess training at a nearby institute in Ludhiana, working part-time jobs to make ends meet. She began skipping meals to save money which took a toll on her health, and sometime later, her hard work paid off, and she was offered a job as an air hostess. She described her first international flight, she was happy as Lazzaro, and at the same time, she was scared to the bones.

Later, during the session, she elaborated on how she managed to gather one million subscribers on YouTube; Mrs. Mamta described the kind of videos she made during the initial days on “how to book wheelchairs?”, and “how to prepare for cabin crew?” She shared some pro tactics for budding YouTuber’s.

Her message, the most disturbing aspect of today’s generation is the lack of effort, attitude, and positivity. Recognizing women’s work, vision, talent, and disintegrating barriers to egalitarianism, especially for women’s is paramount. Sharing the experiences of female achievers and alluding to topics such as the gender gap are examples of this. “While no nation-state on Earth has ever reached true gender equality yet, we are seeing dramatic shifts across the globe, and it is imperative that we maintain the dynamism,” she says. With such beautiful words, the wonderful lady signed off.