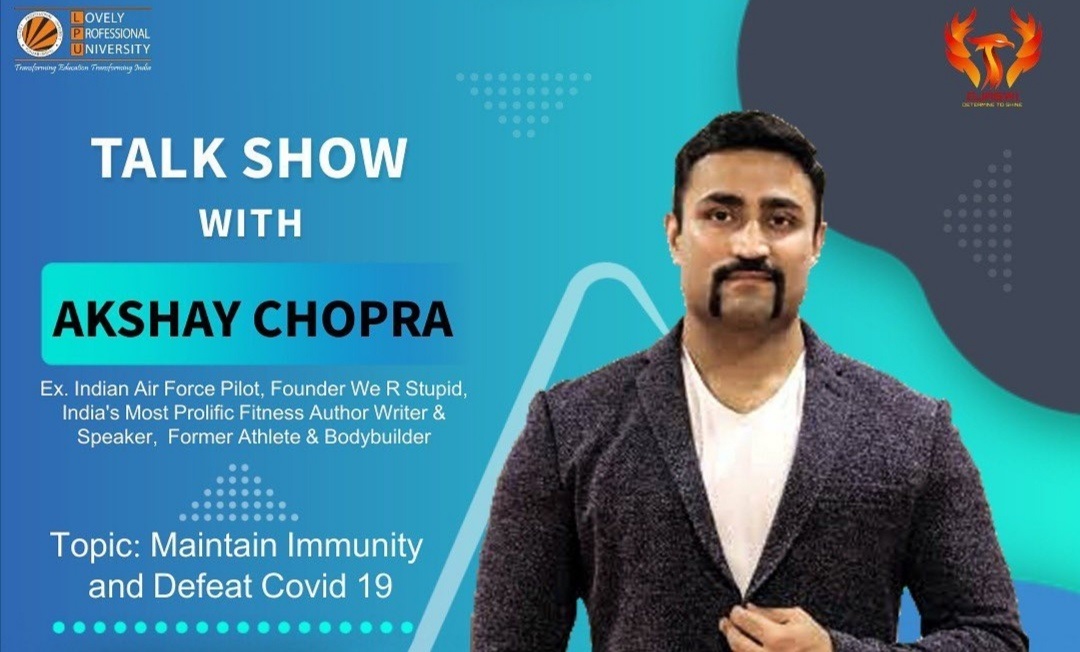 For a good 60 minutes, he explained the little intricacies of the COVID-19 and how to strengthen our immune systems to adapt and get mightier. He narrated how he ended up as a fitness freak. He was born, and he grew in a family of sportsmen. His mother was a national award winner in athletics, 1982-83, and his grandfather was a wrestler, which explains how fitness ended up getting drilled into the family lineage.

He narrated his life chronicles on how he started competitive athletics in school and joining the National Defence Academy (NDA), subsequently flying, followed by competitive bodybuilding. He elaborated his motivation chasing for his passion for bodybuilding after serving the forces for a long time. He very beautifully explained the perplexities of immunity and how we can build our adaptive immunity. He emphasized why regular exercise and proper diet are paramount while building strong immunity and maintaining a fine physique. He explained how people transitioned from a very fit & active lifestyle to a very sedentary lifestyle, also the difference between exercise and overall physical activity.

He elaborated on how humans don’t like changes and how digital transformation can be very beneficial. He shared one of his experiences at the National Defence Academy. He felt disconnected and used to write letters to his family & since modern phones have arrived, he felt connected to his family.

Later during the session, the students acknowledged the incredible physique of the veteran. He shared pro tactics to gauge someone’s anatomy, the basics of fitness, the necessity of physical activity.

He busted many myths regarding fitness, potential benefits of cooked against raw food, and with his independent research, he aims to continue doing this. He explained how he has been battling sleep deprivation caused by a busy schedule, which is very common amongst youngsters can cause a plethora of side effects.

He elaborated extensive research has proven that eating less helped centenarians live over 100 years. He also explained the ancient Japanese concept of Hara Hachi Bu, which implies eating till the stomach is only 80% full, which is the appropriate quantity. One of the common issues with fitness freaks is that they overeat healthy foods, and it is proven overeating with healthy food is also unhealthy. In the end, he insisted everyone perform yoga and meditation every day as if performed aptly it can do wonders.

We can live a long and healthy life with plenty of energy. We don’t have to look for a new miracle xenobiotic, another major catastrophe to knock some sense into us.  The competencies lie within the connections we foster, nourishing our relationships with good nutrition, moving and sleeping healthily, creating a group atmosphere and the social nudges with which we surround ourselves. We can make the healthy choice cushy for future generations and ourselves.  We have an option, and if we choose to enforce it, the impact will be truly phenomenal.