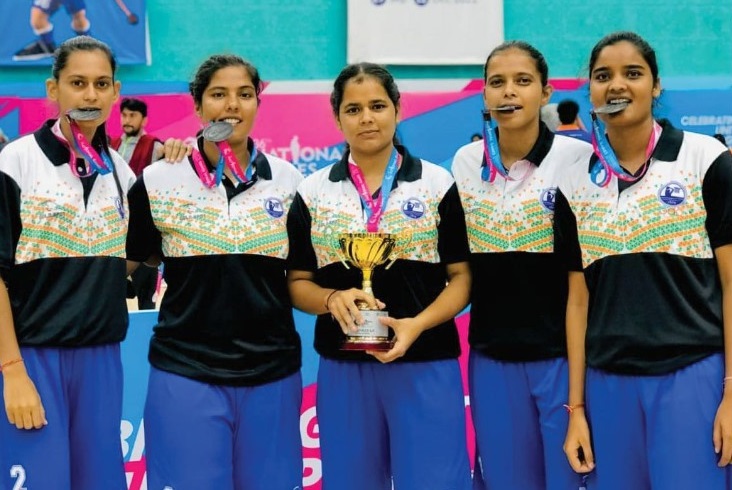 Five girls of Lovely Professional University — Pallavi, Savita Rani, Parwinder Kaur, Amandeep Kaur and Pooja — have made us immensely proud by bagging a silver medal at the National Games, held in Gujarat. The girls were part of the Punjab Netball Women’s team.

For those of you who are not much aware of the Netball game, it is very much similar to basketball, except for certain techniques and the number of team players. Netball has a group of 7 players and is played without dripping or running. It is a game of passing the ball within a time span of 3 seconds. The game is enjoyed across the globe.

“It has been an amazing tournament for us. We all played like a team and the results are in front of everyone,” said Pallavi. We have trained a lot for that and we are happy that the results are good,” she adds.

Students at LPU have always been inspired to do remarkable things by the varsity’s sports culture. These girls have been a part of the Punjab Netball Women’s team. The Punjab Netball Women’s team has been a part of the Netball Promotion Association Regd. Punjab, which has been the sole governing body of netball in Punjab. The entire team of Lovely Professional University congratulates the girls and wishes them best of luck for their future endeavors.

Every single triumph brings with it a sense of joy and fulfillment. As we celebrate the victory of our girls, deep down we know that there are many more moments that are bound to be celebrated and are just on the way.

“We would all like to thank our coaches, LPU for providing us all the support that we need,” said one of the athletes.

Mahatmaji Technical at LPU Campus for workshop on Digital Marketing