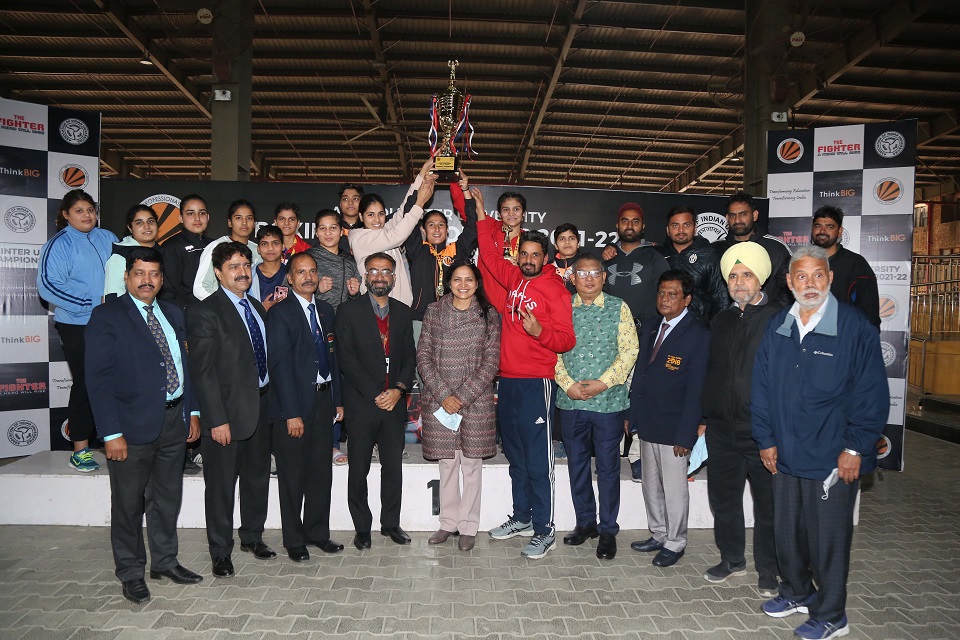 LPU Women boxers’ team has been declared ‘Champion’ at Association of Indian Universities (AIU’s) All India Inter University men/women Boxing Championship 2021. The occasion is the world’s biggest boxing event being conducted at LPU campus with 2500+ men-women boxers of 156 Universities competing from across India. The fifteen day men-women championship is to conclude on 3rd January 2022.

In addition, LPU’s light middleweight (66-70 kgs) woman boxer Arundhanti is also declared as the ‘Best Boxer’. Exhibiting the furious power of their hooks and punches, 3 of LPU’s women boxers have won gold medals and two silver medals in their respective weight categories. LPU’s other two gold winners are Deepa Kumari of light fly weight category (48-50 Kgs) and Jasmeen of light welterweight (60-63Kgs); whereas,  Silver medal winners are Bharti (45-48 Kgs) and Lipakshi (81-81+ Kgs). All of them displayed wonderful skills against their opponents. They also attracted the attention of all boxing lovers through their technically sound and hard-hitting bouts.

Chief Guest of the award ceremony was LPU’s Pro Chancellor Mrs Rashmi Mittal, who handed over the Champions’ Trophy and medals to the respective winners. Mrs Mittal invoked all winners and participants to keep up their passion for the glory of their respective institutions and the country.

Worth mentioning, after the success of many Association of Indian Universities’ (AIU’) sports events hosted, Lovely Professional University (LPU) has now been trusted to conduct the world’s biggest ever boxing event at its campus with competitions. Near 4000 participants, including pugilists, managers, mentors, referees, officials are seen imbibing the theme of the championship- “The Fighter-A Hero Will Rise”.