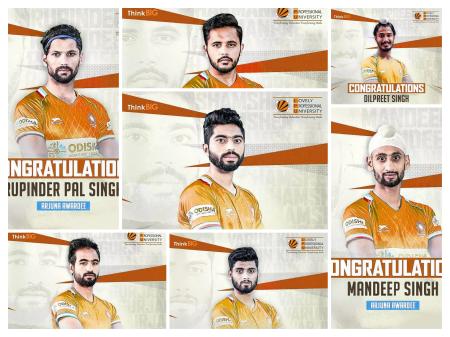 Hard work invariably serves as a harbinger of excellent news. We say so as we are incredibly proud of our maintenance of a series of victories as we commemorate our Vertos aka Indian Men Olympic Hockey Team Players who have been revered with the prestigious ARJUNA AWARD. Arjuna award is given for glorious Performance in Sports and Games and its main aim is to ameliorate the quality of sports within the country. The awardees will be receiving their awards from the President of Asian country at a specially organized performance at the Darbar Hall of Rashtrapati Bhavan on Thirteenth November 2021.

We have not one, not two but seven Arjuna awardees plus one Arjuna and Dhyan Chand Khel Ratna Awardee comprehending Manpreet Singh for the latter and Harmanpreet Singh, Samsher Singh, Varun Kumar, Rupinder Pal Singh, Dilpreet Singh, Mandeep Singh, Simranjeet Singh for the former. Each of these players has played a pivotal role in India’s historic Hockey Bronze Medal win in Tokyo Olympics 2020.

Manpreet Singh is an alumnus of Lovely Professional University, who served the role of captain in the Olympic games and has been an awardee for both the Arjuna Award and Major Dhyan Chand Khel Ratna Award for Hockey. While Rupinderpal Singh (MBA), Harmanpreet Singh (MBA), Mandeep Singh (BA), Shamsher Singh (MBA), Simranjeet Singh, Dilpreet Singh (BA) and Varun Kumar (MBA) have been awardee for Arjuna Award. Harmanpreet Singh is an extremely talented Indian Hockey Player. He has played as a defender for the Indian national team. While Rupinderpal Singh, Mandeep Singh, Shamsher Singh, Simranjeet Singh, Dilpreet Singh and Varun Kumar are Indian field hockey players who play as a forward for the Indian national team.

All the mentioned are the alumnus of Lovely Professional University and have contributed to the honour and fame of it. It feels as if we are somehow a part of a victory when we see that we share the alma matter among them. Perhaps we are not aware of how hard they have worked for it, how many times they stood up after stumbling. However, it is a happy sight to examine their triumph. Their sheer commitment to a task or purpose is perceptive and utterly inspiring to each person watching.  With that, the entire team of Lovely Professional University is extremely proud and fortunate to have such vertos on the campus. We congratulate you all. May you all continue soaring to new heights.

How 11 LPU students shined at the Tokyo Olympics 2020!