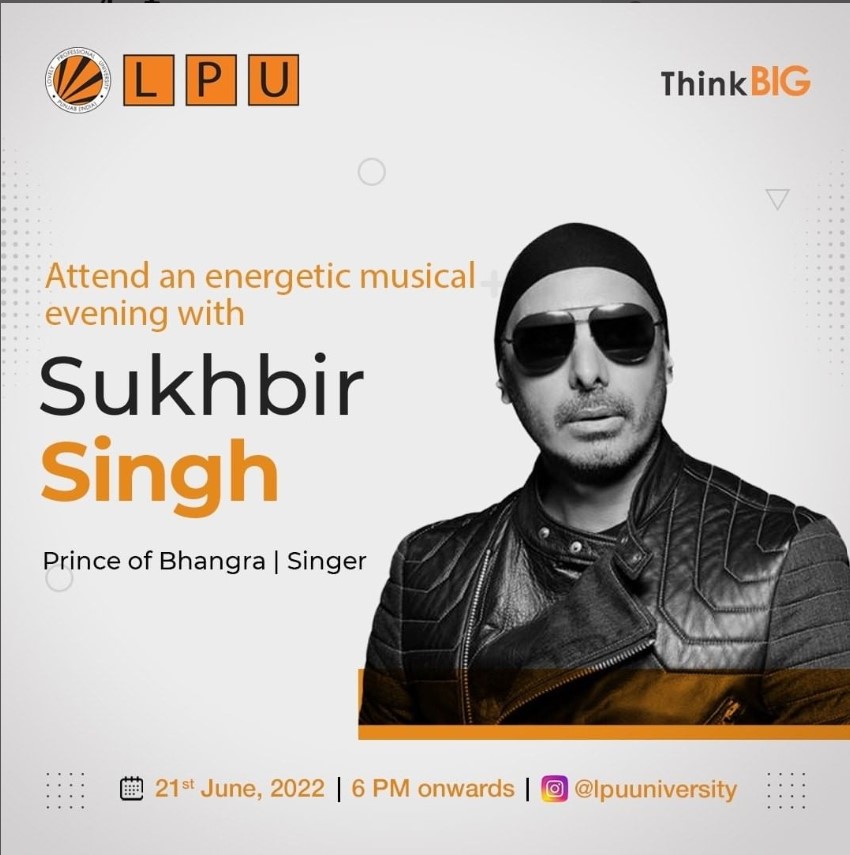 The Student organization, Society for management Learning under the aegis of the Division of Youth affairs, Lovely Professional University is back with yet another enlivening Talk show with an amazing personality, Sukhbir Singh, popularly known as Prince of Bhangra! He is a well-known gem of the music industry and everyone has danced to the songs he has produced starting from “Ishq Tera Tadpave Oh ho ho ho” to “Gal ban gayee” and numerous others.

The live session started with lots of exuberance and as it happened on International Yoga Day, so Sukhbir Singh told about his basic routine and about the stretches that he does after his shows which relax him. During the pandemic, he finally got time to spend with his family so it was like a short break for him where he could once again bond with his family and cherish those moments. He also worked on refining his skills with instruments and production. The very first encounter that he remembers with music was the time when he was living in a gurudwara in Kenya where he heard the tune of “Naagin” and tried playing it on harmonium, to his surprise he got all the basic notes right and that’s when he realized that he has an inclination toward music. He could get the basic notes from any tune on any musical instrument. He owes his musical journey to his father who was trained in Indian Classical music and used to sing Shabad in gurudwara.

During his childhood, he aspired to be a pilot but he couldn’t pursue it at that time due to his financial condition later on to follow his passion, he learned to fly a single-engine plane in London and completed 18 hours. His musical journey was influenced by Malkit Singh, Bob Marley, Michael Jackson, and many other bands. His first album has songs that were a combination of all these influences and it was also financed by his friend. Afterward, songs from this album got Channel V Awards and then his journey toward success skyrocketed.

After releasing his first three albums, the Record label used to release best-of albums where all the hit songs were placed on one CD/Cassette and from here he got the title, “Prince of Bhangra”. He also added that he appreciates the value of his fans and adores them so much. He also sang bits of songs in various languages and his famous songs that the audience requested. His advice to all the viewers was to “Follow your passion, be consistent and keep at it”. One should take all the opportunities that they can use.

To watch this motivating live session, click on the link below: https://www.instagram.com/tv/CfEYyuoqD7z/?utm_source=ig_web_copy_link