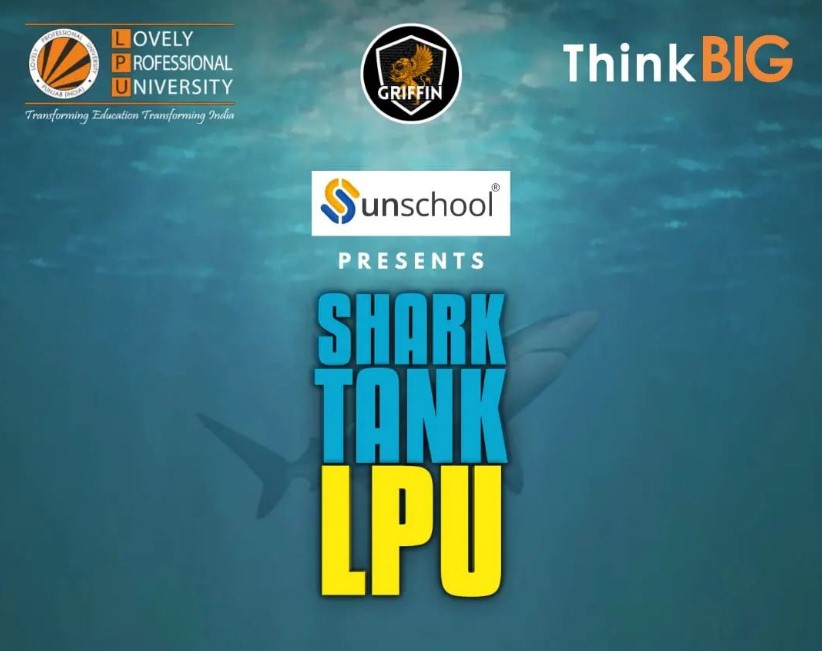 Lovely Professional University has most certainly aced the game of conducting events. Perhaps even when you are reading the article, people in the varsity could have arranged no less than 2 to 3 occasions. Yes! Apart from academics, the varsity has also advanced the forte of entertainment and activities. Consistently around 5 to 10 events are conducted on college premises, corner to corner. This doesn’t end here. We have various organisations which contribute towards the planning and executing of various events which generally bud as ideas.

Often we see many organisations conducting events that lead to results worth appreciating. And we can say that SHARK TANK was one such incredible event that ended up generating a ton of exhilarating ideas. It as an event was a huge success, all thanks to our incredible panellists and the team of coordination and management. The event was organised by the student organisation Griffin and was sponsored by Unschool. The student organisations Paigaam, Ojaswi, Factum, Aurora, Tachyons, and UNYC were its promotional partners.

Talking about the event, it was numbered into several rounds. The first was the one wherein the legit registrations were analysed by a group of people. It was followed by the introduction of our panellists. There were two consecutive meetings, one of which was a shark tank lounge that was backstage for the participants. From there the participants were sent in a sequential manner to the show, where the participants presented their ideas and heard the verdict of our very worthy panellists.

Our panellists were none other than the students at varsity holding considerable positions at various organisations and clubs. They had quite an experience of planning and executing various events and selective celeb shows and now were going to help their fellow mates who as contestants have presented themselves. We had a significant number of participants in the show, who had unique event ideas. The ideas were heard and analysed thoroughly and then as per their credibility they were provided with a prognosis. As a result, numerous ideas were selected and kept aside for execution sooner or later.

The event lasted for more than 100 minutes. Everything was organised in such a way that every second is utilised. Our panellists were intrigued by the sophisticated execution of the events. “The show ended up being more than expected,” said Shreyanshu Roy. The show had surpassed the expectation of everyone. The interest and the spirits of other sharks during the discussion itself were proof of how well the participants have prepared themselves for the challenge. The ideas presented were not only innovative but are also going to change the event lifestyle of LPU in the forthcoming months. The event was indeed a success. Two months of hard work for each and every member, coordinator and shark have finally paid off.  Also as an event, it has already been preplanned, a series of new and exciting ideas which soon are gonna turn into thrilling events. Let us wait for them while reminiscing about the Shark Tank.