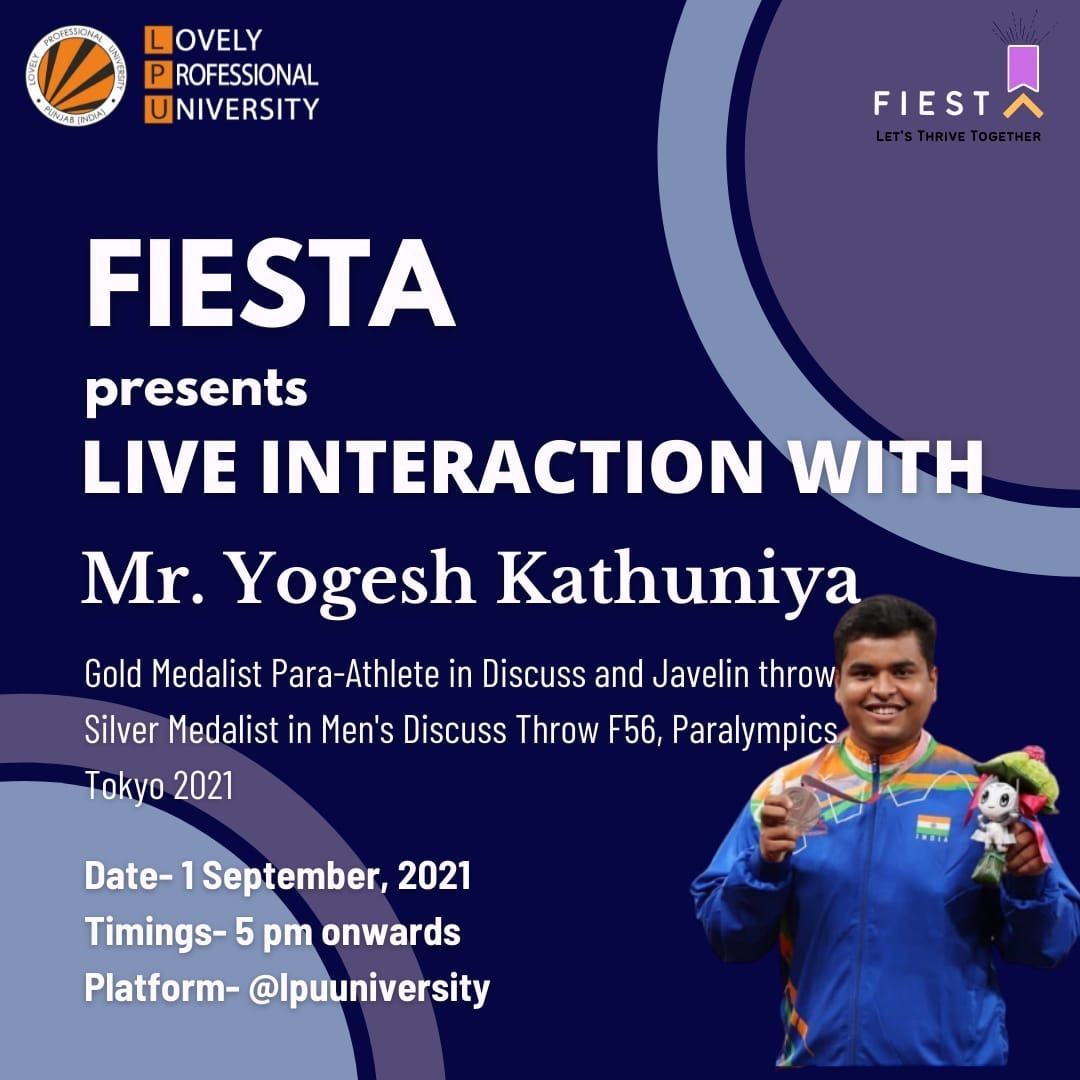 Yogesh Kathuniya is an excellent Indian Paralympic athlete who represented India in Tokyo Paralympics 2020 and brought home the Silver medal with his outstanding performance and exemplary success in the men’s discus throw in the F56 classification. The encouraging live session was conducted by the Student organization, Fiesta under the aegis of DSW, LPU on 1st September 2021.

He was speechless about his achievement and what made it even more unbelievable for him to earn a Silver medal was that it was his debut Paralympics. As a para-athlete, he explained that they have to undergo vigorous training, a strict diet and have to follow other guidelines too. He spoke about various difficulties and gave a very important lesson saying, that as a para-athlete, he thinks that we can’t move towards success until and unless we face our difficulties.

When he was 8 years old, his life took a sudden turn when he had his first paralytic attack and after that, it was difficult for him to walk for two years. When he was in Kirorimal college in 2017, his senior, Sachin Yadav guided him about para-sports and motivated him to give it a shot. His friends even motivated him and he started working towards it. In 2018, he made his first international debut in the Asian Para Games in which he ranked 4th. He continued to achieve more and went to World Para Athletics Championship 2019 where he won the Bronze medal and now, in his first Paralympics, he got a Silver medal.

His constant motivation was his friends. He faced many problems and even experienced bullying during his school time but in college, he found some true friends and he gave them credit that they are the reason why he has come this far. At the start, like every other athlete, he faced difficulties as the coach also analyzes his trainee and explores which body part is weak and on what part they need to work more.

His biggest support system is his mother and has always motivated him. He was overwhelmed with the whole experience of the Tokyo Paralympics. This year, many people are following the Paralympics, and the Sports Authority Of India has also immensely supported them and he is grateful. He is an inspiration to everyone that we can achieve anything and be a pride for the nation, despite how many difficulties may come our way.

To watch the full live session, click on the link given: https://www.instagram.com/tv/CTR1SO4jGvy/?utm_medium=copy_link