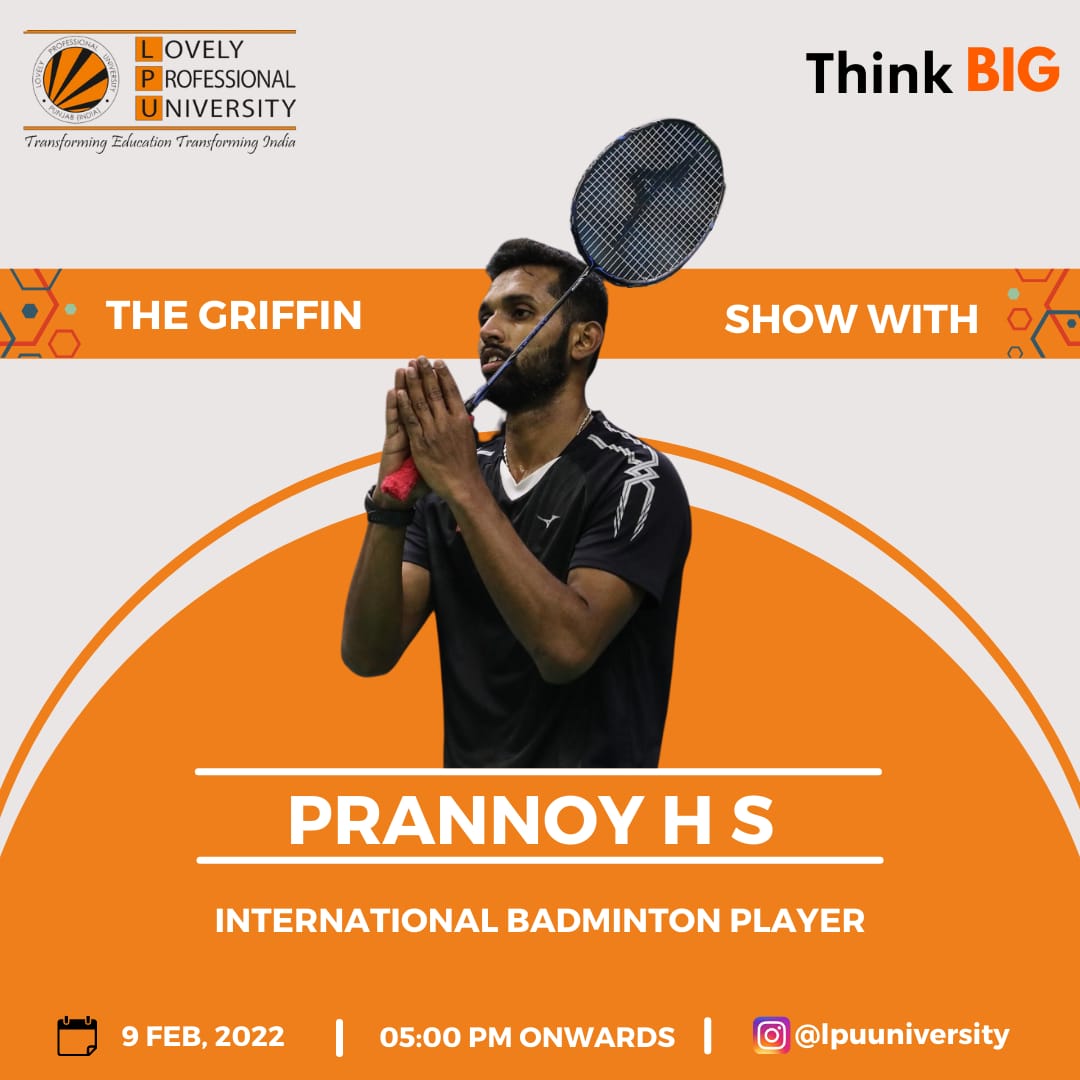 The student organization, Griffin came up with another episode of ‘The Griffin Show’ with an amazing personality, Prannoy Haseena Sunil Kumar, also known as Prannoy H S. He is an Indian badminton player and is currently training at Gopichand Badminton Academy at Hyderabad. At the 2018 Commonwealth Games, he won the Gold medal and like this, he has bagged many awards and titles, making India proud with his performance.

The live session started with Prannoy H S talking about his day, that a tournament will be there in March which will keep him busy so this is the time when he can relax physically and mentally. During the initial period of the pandemic, he found it challenging as he couldn’t train at court for almost 4 months. His interest developed for badminton because of his father who himself is a former badminton player who introduced him to this in his early years. At the age of 10, he went to a coaching center and started his training professionally for badminton. He also played cricket with his friends, so till the age of 14-15, he never took badminton seriously. After this age, he realized that he would love to play badminton seriously.

His first coach, Shivrama Krishnan taught him the basics which are essential for playing badminton. He made the process of learning interesting and because of this, Prannoy was never exhausted. In school, he had a tough time balancing studies and badminton. As he grew up, the pressure of studies increased as well as playing badminton also increased. During this time, some teachers told him to focus on his studies, on the contrary, others supported him. His parents were also very supportive of him. He also advised the vertos, that focus on what you feel is the most appropriate for you so you don’t regret later thinking that I should have given more time to this or that.

He believes that “If you want good days, you also have to suffer through bad days.” You have to be mentally tough on not-so-good days and believe that things will turn around for the good. It depends on how much effort you take. It is important to keep clear targets and then work for them. While playing, he only thinks about the game and what other technique he should apply and shuts down all the noises focussing on just the ongoing game.

He emphasized the fact that in sports, sometimes crown expectations can be overwhelming but at the same time, it can give a boost of energy. Sports is all about winning and losing. He also added that it’s okay to make mistakes and that is how you know where you went wrong and learn from it. You should try everything possible and then come to conclusion about what works better for you.

To watch this enticing live session, click on the link given below: