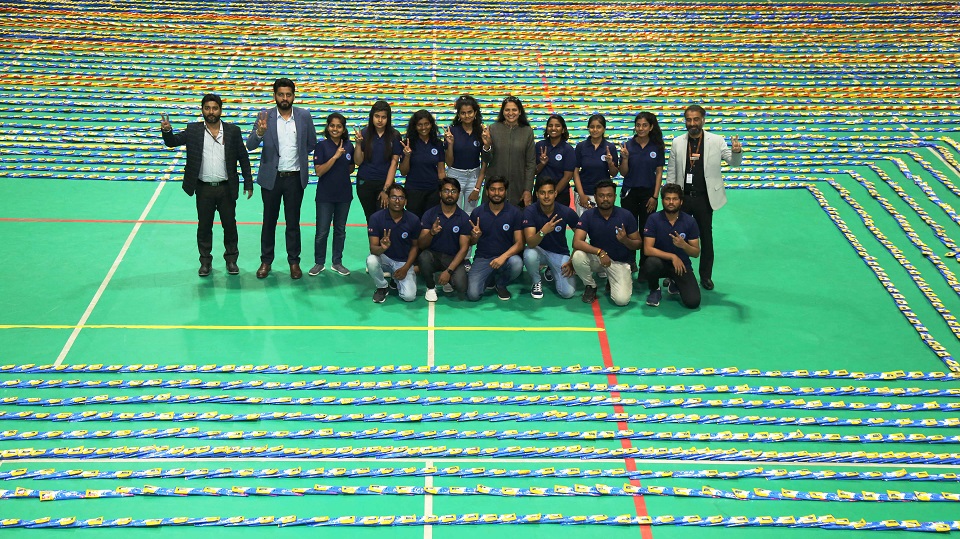 Lovely Professional University commemorated International Women’s Day with an attempt to establish ‘New World Record of the Longest Line of Sanitary Pads’ spread at its Shanti Devi Mittal Indoor Sports Complex. For this, 300+ LPU NSS volunteers lined up 26001 sanitary pads in a measurement of 3256 meters. This mammoth spread of pads under ‘Nari Project’ at the university was to promote menstrual hygiene among women and to avoid social stigmas in this regard. The pads were later on distributed to needy ones, particularly residing in nearby villages and slum areas.

Medically, it is strongly suggested that sanitary pads are required for every woman for her hygiene. These are required to avoid pelvic and urinary infections and related problems. In fact, a low percent of Indian women (aged between15 to 25) use hygienic methods of menstrual protection. No other day would have been more suitable than this day of theirs for the spread of this message throughout the world. LPU Chancellor Mr Ashok Mittal congratulated hard-working NSS volunteers for their regularly operated social projects of awakening, and efforts taken for the creation of a world record on international women’s day.

Symbol of ‘Women Empowerment’ at LPU Campus, LPU Pro Chancellor Mrs Rashmi Mittal has aired her views for this day of importance on All India Radio and inked for journals as well. Mrs Mittal shares: “There is a need for men and women to align themselves for an equal society. Women’s true potential is crippled behind the bars of early marriage, unequal opportunities in education and profession. Both genders need to look beyond their gender to treat women equally.” She further emphasized that the attempt on such a record of awakening is sure to boost female education and empowerment.

Renowned Senior Officers from the Punjab Government, SMO Dr Manjit Sodhi and SDE Er Jaspreet Singh of PWD B&R witnessed and acclaimed the attempt on novel record. President Vitin Puri of Hindustan Welfare Blood Donors Club (Phagwara) was also accompanying. The previous record of the longest line of sanitary pads was established on 12 March 2020 with 20,320 pads only. It was achieved by the United Kingdom’s Aston Panthers Netball Club in Birmingham, UK. Highlighting, LPU has already established three more Guinness World Records at the campus through its students and staff members.

Observing the United Nations’ theme of the year-“Gender equality today for a Sustainable Tomorrow”; ‘Break the Bias Campaign’ was also initiated at the campus, on the eve of the celebration.