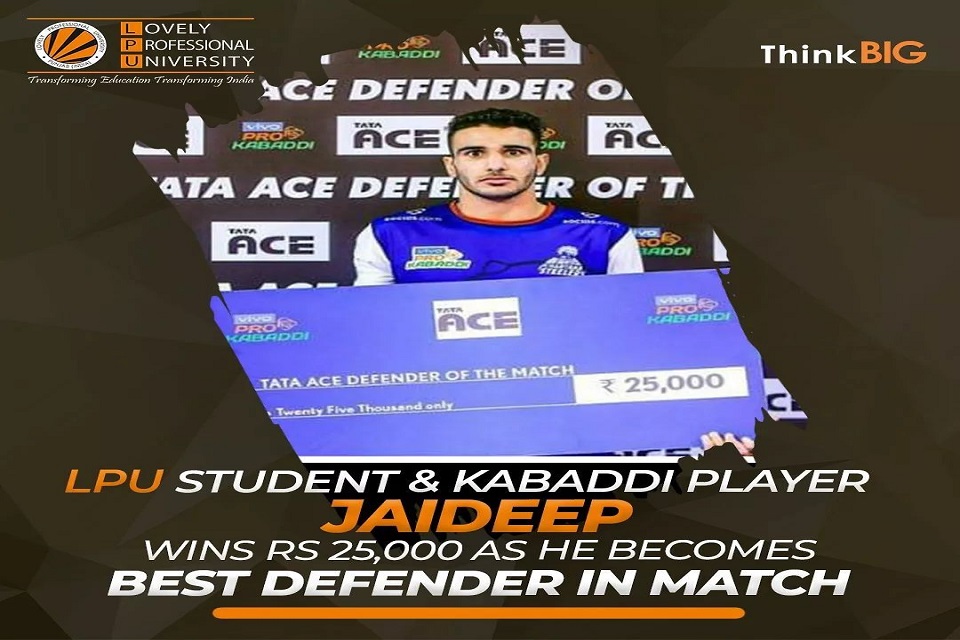 Students from LPU are putting in outstanding performances one after another in the Pro Kabaddi League. Meet Jaideep Dahiya, a kabaddi student at LPU who was named the best defender in the match between the Haryana Steelers and the Jaipur Pink Panthers. In addition, he got INR 25,000 in prize money.

The Jaipur Pink Panthers defeated the Haryana Steelers by a two-point margin in their first match of the season. With a 40–38 victory over the defending champions, the inaugural champions earned their first victory of the season. The Haryana Steelers forced an early all-out on the Jaipur Pink Panthers in the sixth minute of the first half, forcing them to forfeit the match. Beginning with the first round of the match, Haryana established a dominant position. The cover on the left Jaideep Dahiya earned his second consecutive season-high five points total in the first half of the game.

The Pink Panthers made a strong comeback in the game thanks to Arjun Deshwal’s hard-working Super 10 performance in the first half. With a score of 22-21 at the end of the first half, Haryana’s lead had been cut to just one point at the halftime break. Also in the second half, the team continued to score at an excessive rate. No one, however, was able to put themselves in a dominant position. Jaipur won the Pro Kabaddi League game by forcing the Steelers into a crucial all-out and taking a commanding lead in the process. When it came down to the dying minutes, Haryana made every effort to get back into the game, but the course of time conspired against them.

Lovely Professional University places a lot of value on students taking part in a wide range of indoor and outdoor sports and games. That’s not all, though, because many Vertos become good at something because they play sports. This has led to them having a lot of success! There is a strong emphasis on the widespread participation of Vertos, transforming leisure time into something constructive and, perhaps, the first step toward a healthier lifestyle.

Lovely Professional University sends its heartfelt congratulations to the athlete and wishes him the best in his future endeavours.