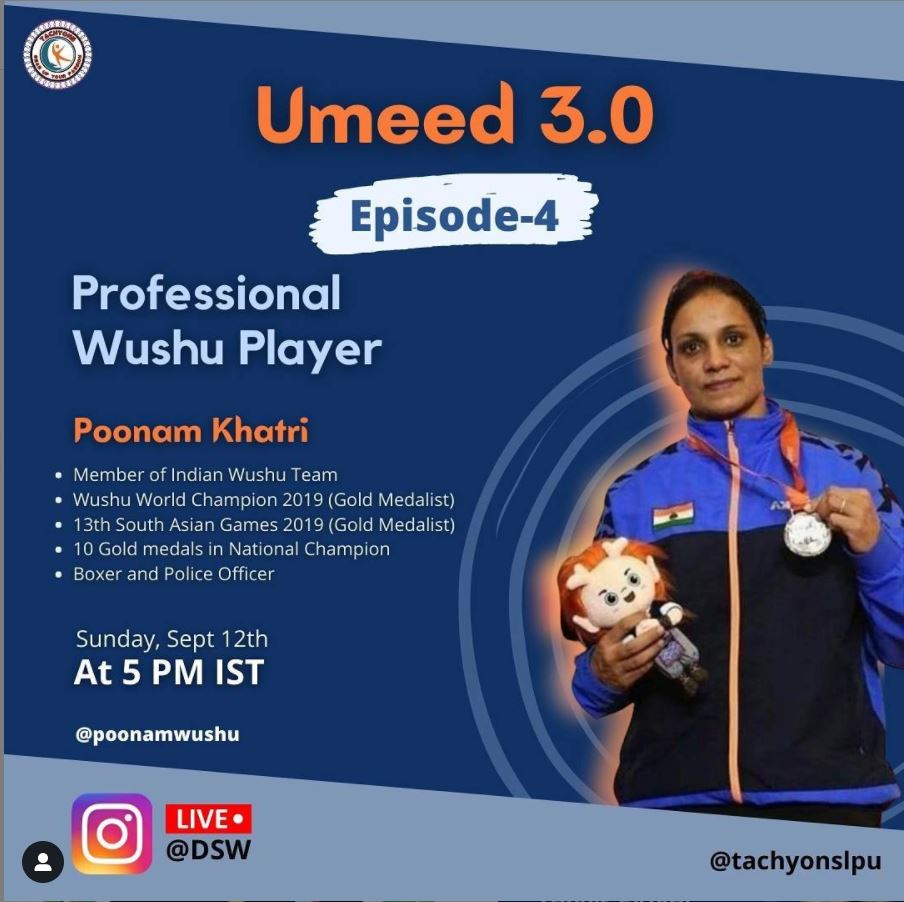 Poonam Khatri is a Wushu player, martial artist, and athlete. She is also a police officer. She won a gold medal at the South Asian Games in the invitational sports of Wushu. She also won gold at the 2019 World Wushu Championships in Shanghai, China in Women’s Sanda 75 kg category. This live session was conducted on 12th Sept 2021 by the Student organization, Tachyons, under the aegis of DSW, LPU.

She hails from a very small village in Haryana, Soldha. At that time, people used to believe that marriage is the foremost priority for any girl but her father always supported her and never pushed her to do anything against her will. She had a keen interest in sports and always wanted to become a gold-medalist, making her nation proud. She was very active in games from her school time. Her cousin introduced her to Wushu which is a Chinese martial art and showed her this martial art. The moment she saw her cousin playing, she decided with determination that she will play Wushu. Her sister provides constant inspiration to her.

After undergoing the tough practice, she won her first gold at the national level in 2003. This incident motivated her and with her father’s full support, then in 2004, she made her international debut at the Asian Wushu Championship where she won a bronze medal for India. She feels overwhelmed by the fact that her father and the whole nation are proud of her. Wushu is a free-fighting game that is a combination of boxing, wrestling, and taekwondo, as explained by Poonam Khatri. She motivated the vertos by saying that we should never give up, quitters never win and success only comes to those who have the willpower of moving forward and not quitting. Everyone should learn martial arts for self-defense purposes.

Even during tough times in the pandemic, she never missed practice as it plays an important role in sports. Being fit is another factor that weighs in and she couldn’t let this hamper her hard work and consistency.

Everything depends on our willpower and our outlook, if we see everything as a hindrance then it will hinder our path but if we are determined to not give up then our path becomes clearer. She also asserted that people should support players from starting level so that they can be motivated and this will also help in increasing the medal tally in international games. She also plays many games for the police department. Before doing anything, we should set our mind and it starts from the moment when we ask ourselves, what do we want to do? Everyone else’s support is important but what plays a major role in our success is our belief in ourselves and be our own support system.