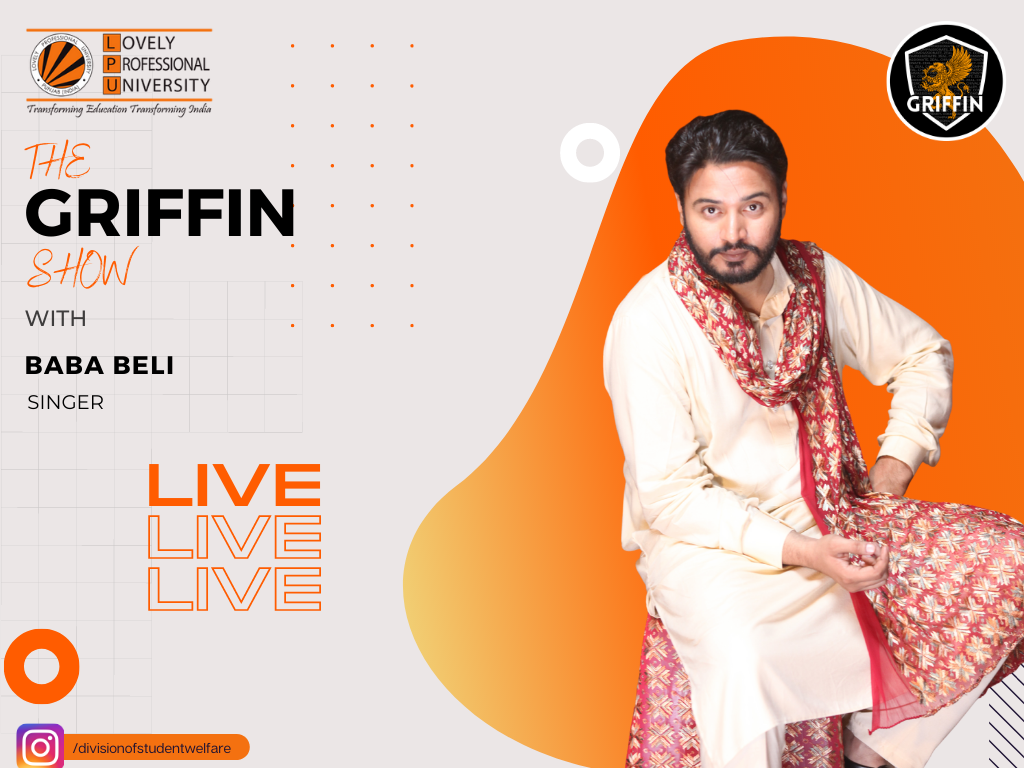 Continuing the aura and magnificence, Student Organization Griffin, presented yet another episode of ‘THE GRIFFIN SHOW’. Hosted on the official Instagram Handle of Division of Student Welfare, Student organization GRIFFIN hosted famous Punjabi singer Baba Beli on their LIVE show this time.

Baba Beli is a well-known name in the Punjabi music industry for his unique style of music and his out-of-the-box taste of music. This LIVE show is just another special session in the books of LPU. Why so? Well, the reason is revealed by none other than Baba Beli himself at the very beginning of the show. Baba Beli hailing from Punjabi background stated that ‘THE GRIFFIN SHOW’ is the first-ever platform where he is doing an online talk and that too in Hindi which he has never done before for any other interviews.

Further, when asked about his journey in this field, Baba beautifully traced back to his roots and the time when he did his first project. The very first song he wrote was titled ‘Akhan’. It soon went viral and superhit in no time establishing his name in the industry as a songwriter. And from that point on he never looked back. Writing songs and singing has always been a close partner to him.

Going even more to his childhood days, Baba states he has always been an avid writer but never thought that writing or music could be something he would pursue with all his heart and passion. It was only after he met famous Punjabi Sufi singer Kanwar Grewal, his teacher then, and worked on his first project, he went on to become a superhit that he finally saw the bigger picture and how he could put himself in the Global ever-growing sphere of music.

When asked about the challenges and difficulties that he had faced in his life, he simply denied that he hasn’t. It was only for a moment after he revealed the bigger and deeper meaning to his thought that things become way clearer. According to him, the only thing that will stop you or pose a hurdle in your life is your own perspective. The day you stop treating the challenges as a difficult challenge and more like something that is just a part of life that you have to pass through in order to grow and evolve, challenges will cease to exist for you.

Also well known for his Shayari’s when asked how he writes them and what’s the meaning behind those Shayari’s, Baba Beli yet again captures the audience by stating that his Shayari are not about the words but the spaces in between. It only reflects what’s inside the mind and heart of the reader.

When asked about his future projects and the kind of music her wants to bring into the music culture, he proudly expresses his love for Punjabi folklore. He believes that the rich culture and musical heritage that the folklore holds usually gets decimated with the older generation. He wishes to stop this and bring in the age-old tradition and rich musical heritage back to the younger and wider audience.

Baba Beli showed his gratitude towards the whole community of Student Organization Griffin and Lovely Professional University. It was indeed a mesmerizing live session. No need to worry, in case you have missed it, here is a link to the complete show: https://www.instagram.com/tv/CTuMZXRpToe/?utm_source=ig_web_copy_link