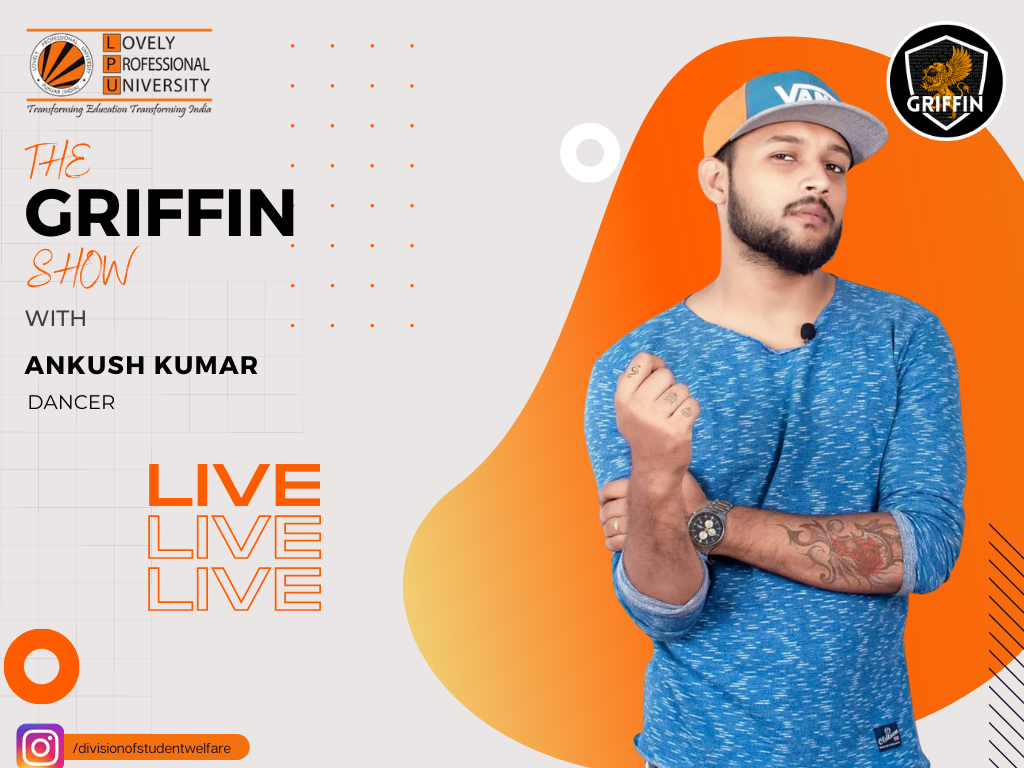 Student Organization Griffin presented yet another episode of ‘THE GRIFFIN SHOW’. Hosted on the official Instagram Handle of Division of Student Welfare, Student organization GRIFFIN hosted famous Dancer and YouTuber, Ankush Kumar, on their LIVE show this time.

When asked the songs he loves to dance on, he cleared that he loved the songs of the late 90s and 2000s. For dancing, Ankush further added, the most important thing is music. A person who understands music could easily pull off a dance routine. The newer array of songs lacks that music and due to the same, it is not a great choice to dance.

For most people who don’t actually know Ankush personally, he is also a trained Actor. If he has to choose between Acting and Dancing, Ankush said, he would any day choose dancing. The reason he wanted to learn acting is to improve his skills as a dancer. According to him, when we learn the details of acting and expressions it improves and evolves our dancing to a whole new level.

The role of expression is quite important in dancing. Ankush gives a lot of focus on expression for his dance choreographies. He makes sure that every expression is clear and on point o express and connect to his audience as well as compliment the music.

Being an avid fan of Acting and Stage performances, he had done a lot of plays. Recalling his experiences on one such play, he shares, to get into his role of a beggar, he chopped his hair short, did not take a bath, just to get into the method acting aura.

One thing that he did say focused on his work and craft is that he removed his TV from home. He also suggested that everyone should do the same. The television according to him is nothing but a useless thing that distracts you from your goals and vision. It is better to stay idle than to waste time on TV. Idleness is great. Idleness makes you reflect on your life choices and you tend to spend more time on yourself rather than wasting time on reality shows that tend to play with your emotions.

Ankush also loves collecting Energy Drinks. He is a minimalistic person and believes that we as humans have very few requirements. We just tend to push that greed and add on possessions that we don’t necessarily need or be benefitted from in the longer run.

Ankush Kumar showed his gratitude towards the whole community of Student Organization Griffin and Lovely Professional University. It was indeed a mesmerising live session. No need to worry, in case you have missed it, here is a link to the complete show. https://www.instagram.com/tv/CT7C4LsKZ6a/?utm_source=ig_web_copy_link

The Griffin Show with Divy Khatri aka The Himalayan Husky

The Griffin Show with Baba Beli