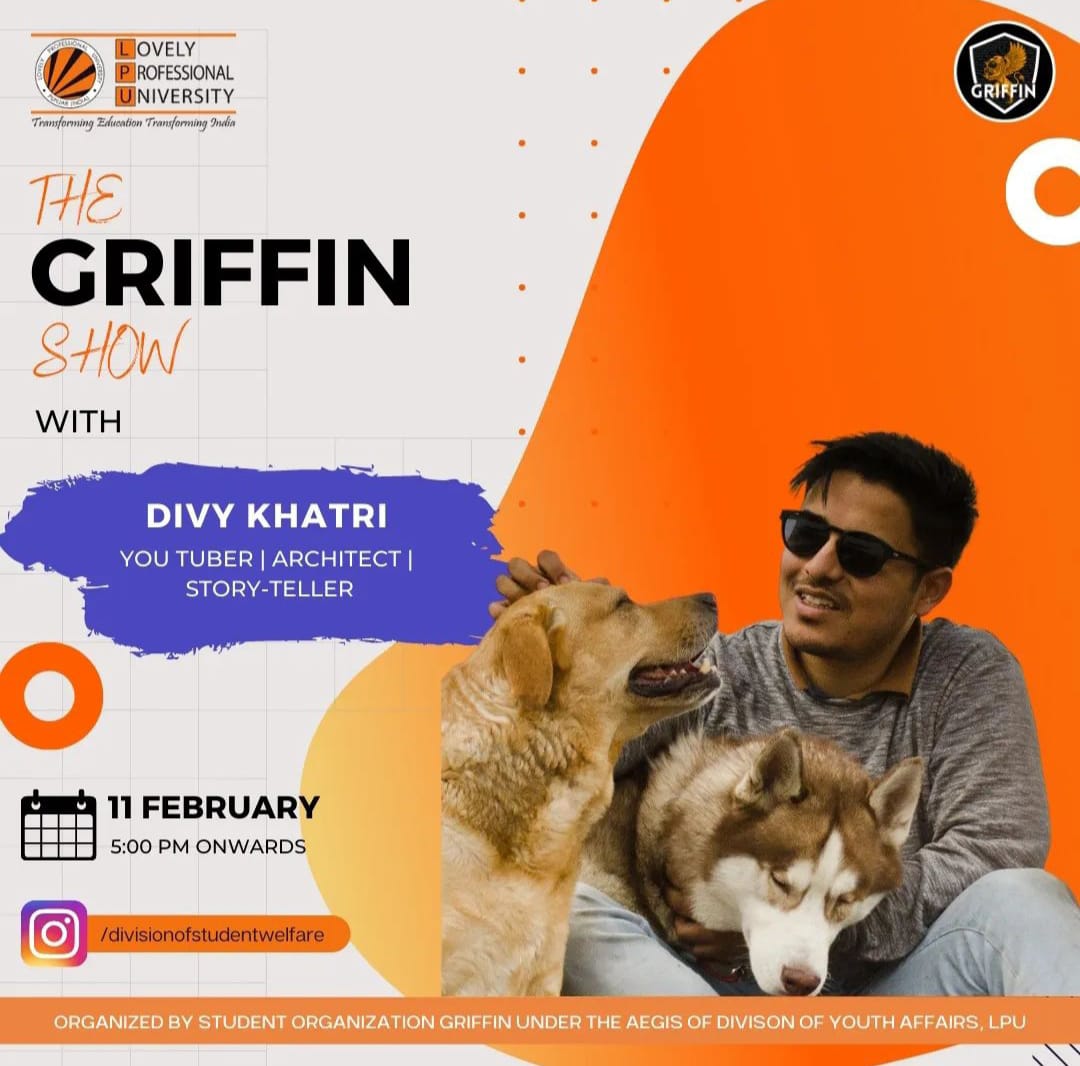 The student organization, Griffin, under the aegis of Division of Youth affairs came up with a brand new episode of ‘The Griffin Show’ with a mesmerizing personality, Divy Khatri aka The Himalayan Husky (@the_himalayan_husky). He is an architect by profession, storyteller, and YouTuber by passion. Currently, he has more than 370K subscribers on YouTube solely based on animals, but mainly dogs.

Divy Khatri always wanted to be a photographer, so he made a channel where he posted pictures of his Siberian husky, Ghost, and then his other Labrador, Max was also included in the channel. Max is the eldest. He named his husky, Ghost after John Snow’s dog in the famous fantasy drama series Game of Thrones. He makes entertaining content based in Pithoragarh. While going to mountains, one should keep in mind to cover themselves properly and wearing layers should be worn. Though it looks fun, one should be prepared with basic necessities while going on a trek or any hilly area.

He also owns a famous cafe in Pithoragarh, “Cafe on the rocks”. He opened this cafe in the hope that people could experience the serenity of the mountains. He has a very strong bond with his dogs and shares companionship. He also described that they have a very pure connection and loves unconditionally. He is also doing his part to contribute to other animals by feeding them and taking care of them. He also plans to build a shelter home for stray dogs, with all the facilities and hoping to work on it as soon as he can. Divy’s love and emotions for animals were crystal clear.

For starting his channel, he also learned video editing. He was so passionate about sharing his moments with everyone that he used to share videos of his dogs regularly. The name for his channel came instantly to him and he knew that this name will be the best for them. He got inspired to start YouTube from Peter Mckinnon and then as time passed by, he made changes accordingly. He also added that whatever you do, you have to be true to yourself and be transparent. Life is all about good days as well as bad days. The final message that he gave to vertos was that always do what your mind says, not what other people say when it comes to choosing your profession. It should be something that never makes you feel that you are living a monotonous life.

To go through this entertaining session, click on the link given below:
https://www.instagram.com/tv/CZ1jXTxJab6/?utm_source=ig_web_copy_link