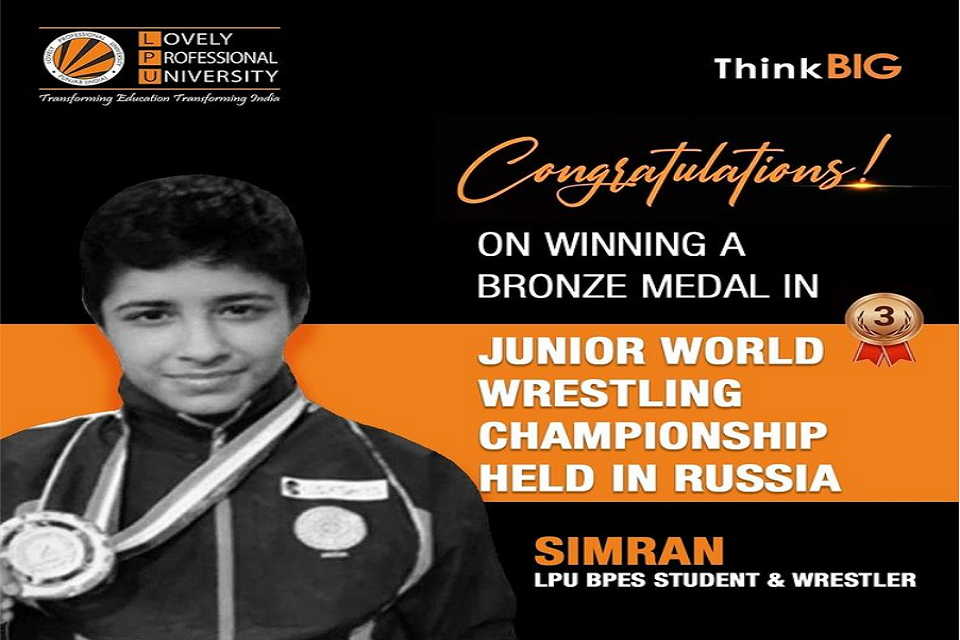 Once again, LPU excels in the sport of Wrestling on the international stage! LPU students are setting benchmarks all around the world. Recently, LPU BPES Student and wrestler Simran won Bronze Medal in Russia’s Junior World Wrestling Championship. It is a matter of huge pride for LPU that its students are bringing laurels from all across. We extend our biggest congratulations to the Verto and commend LPU’s steadfast commitment to raising the Tricolor with our excellent sports achievements!

Simran started the championship with dominant performances. Simran defeated Romania’s Georgiana Lavina Antuca with technical superiority. In the match against Romania’s wrestler, Simran did not concede a single point. In the quarterfinal match, Simran pulled off a victory by ‘fall’ against Azerbaijan’s Gultakin Shirinova. The quarterfinal match was a high-scoring match with a score line of 18-8.

With two dominant wins, Simran lost the last four stages of the match against American Emily King by technical superiority. Emily King went on to clinch gold in the 50 kg wrestling category. In the bronze medal match, Simran was trailing 0-3 at the end of the first period. But she came from behind with an impressive performance and clinched the bronze with a win of score line 7-3.

Sports Authority of India-appointed coach at Master Chandgiram Akhara, Sahdev Singh Balian, said, “Simran is an upcoming wrestling star and she has made the country proud by winning medals at the international level many times in the past. Finally, the sacrifice and suffering of the family has paid off.” Simran has also won a bronze medal in the World Cadet Championship in 2017 and a silver medal in the 2018 Youth Olympics. Simran was rewarded with a cash prize of Rs. 31,000.