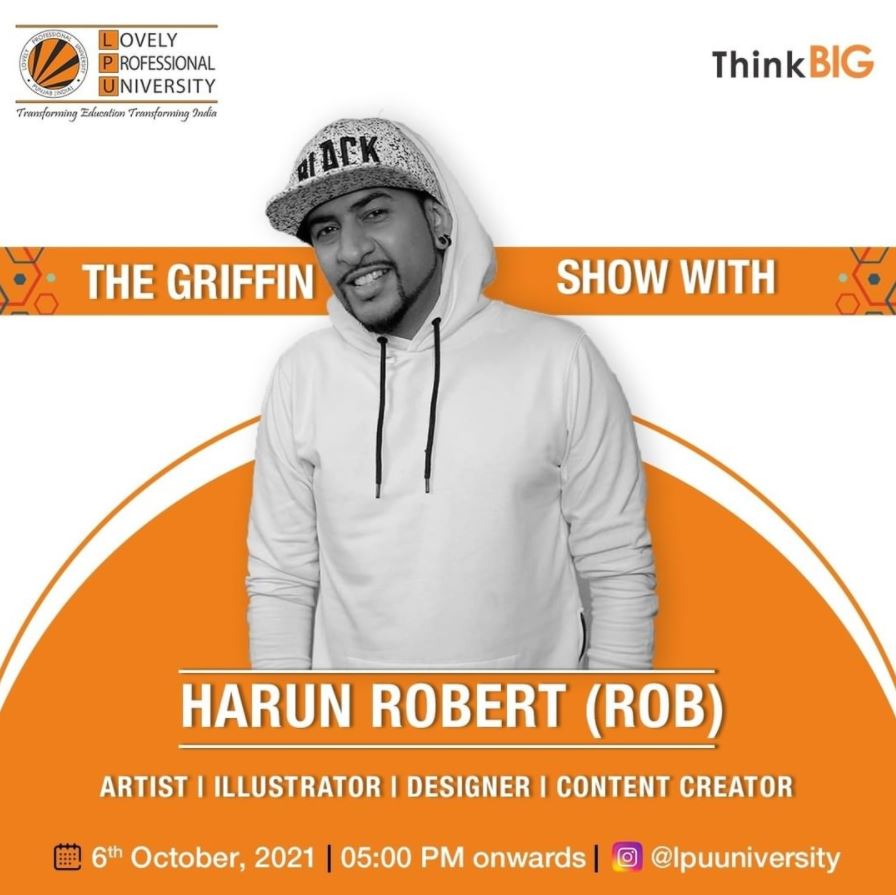 The student organization, Griffin, presented another episode of “The Griffin Show” with an eminent artist, illustrator, designer, and content creator, Harun Robert, popularly known as Rob from Pogo’s DIY Art and Craft show, M.A.D to rejuvenate our childhood memories. Vertos had this amazing opportunity to interact with their icon who helped us in exploring our creative side.

During the lockdown, he became more productive as he usually worked from home, and many brands also approached him. He also added that however, the times were tough but people also realized the value of tiny things in life. He showed his gratitude towards his audience who supported him and motivated him to come up with new and innovative artworks. He spent his childhood in Delhi and was always close to nature. Nature also inspired him to draw and helped him to bring out his artistic side.

Harun Robert had no knowledge that art could even be pursued as a career, so while preparing for the medical entrance exam, his friend introduced him to Art school, and then he decided to talk to his parents about it. As art was not as prevalent a career as others, his parents were not happy. He also added that “We can’t even blame our parents, they only want their kids to be happy and want a stable, secure future for their child. Society has brainwashed them that art is not a lucrative career and this is something that worries them” But seeing at his passion, they agreed to send him to NID, Ahmedabad.

As many of us have heard, that most artists are introverts and the same applied to him too. He also loves dancing and performed several times but being on camera and hosting his own show was something he never thought about. During his years in NID, he also learned animation and came to Mumbai for working as an animator. Soon, he came across pogo and the rest is history. When his show aired, it was a very proud moment for his parents. His relatives also criticized him when he took Art as a career that art is a hobby and career can’t be made out of it. By his show, he wanted to change the mindset and make people aware that there are various possibilities for art so that next time if someone around them wants to pursue art, they can be supportive. He wanted to be a role model for young minds and everyone around.

He added, “If you are passionate about something, you’ll be able to figure out everything. If you feel that hunger for something, you will find a way.” First, we have to make decisions and have clarity in mind, then we can convince anyone. For him, the transition from TV to digital was very difficult. When he first opened his YouTube channel, he had fewer subscribers for almost a year, and then he realized that TV is different from digital and made the necessary steps. Now, Harun Robert has a community of over 2 million subscribers. His motto in life is to make good memories.

It is very important to present your work and if you will not present it and keep on evaluating yourself, there will be no growth so, give others a chance to give you feedback. His final message to vertos was “Enjoy your college life to the fullest, make many and big memories, make precious and good friends circle and try as many things as you can. Surround yourself with positive and happy people. Focussing on studies is important and so is participating in extra-curricular activities. This is a short period of time when you should do as much as you can. More than portfolios and degrees, people want to see your personality. Remember to experience, explore, engage and expand.”

The Griffin Show with Zion Clark

The Griffin Show with Divy Khatri aka The Himalayan Husky