Congratulating LPU’s BSc student Rafey, PM Modi has also tweeted: ‘The young Mohammad Rafey from Prayagraj is an international gymnast. He has represented India in the Junior Asian Cup, Mongolia. He is a five-time national champion and has won many medals. May he bring many more laurels for our country, Congratulations for the Bal Puraskar!”

PM Modi also interacted with the awardees via video conferencing. Using blockchain technology, PM Modi awarded digital certificates to the winners of the two years 2021 and 2022. He also invoked the awardees to always “think of the nation first and perform duty“. During individual interactions, PM Modi shared that the “awards demand a great deal of responsibility. Instead of being stressed, they should stay more inspired”.

Illustrative, the Pradhan Mantri Rashtriya Bal Puraskar is awarded to children aged between 5 to 18 years of age. It is given in recognition for special qualities and excellent achievement in six categories- Innovation, sports, academic achievements, arts and culture, social service, and bravery.

When Rafey was declared the winner for this award last year; Union Cabinet Minister for Women & Child Development, Smt Smriti Irani did inform that “Rafey a young sportsperson from Uttar Pradesh is an international gymnast, who has won more than 50 national medals & a bronze medal at the Junior Asian Cup, Mongolia in floor exercises at the artistic gymnastics event.”

Feeling immensely elated, LPU Chancellor Mr Ashok Mittal shared: “It is indeed a matter of pride and morale-boosting for all at LPU that our students are regularly earning national and international recognition of highest ranks in diverse fields.  We, too, keep on encouraging such students to bring more and more laurels for the country, university and themselves by bringing out the best from within. University always facilitates such students as per the policies, including 100% fee waiver, as Rafey is also availing the same since his enrolment at LPU.” 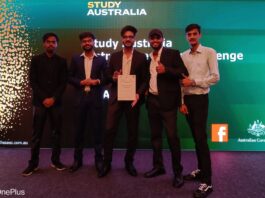 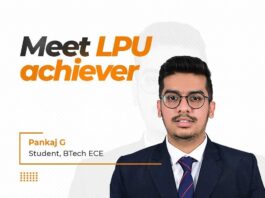 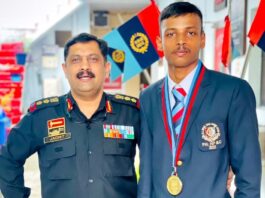