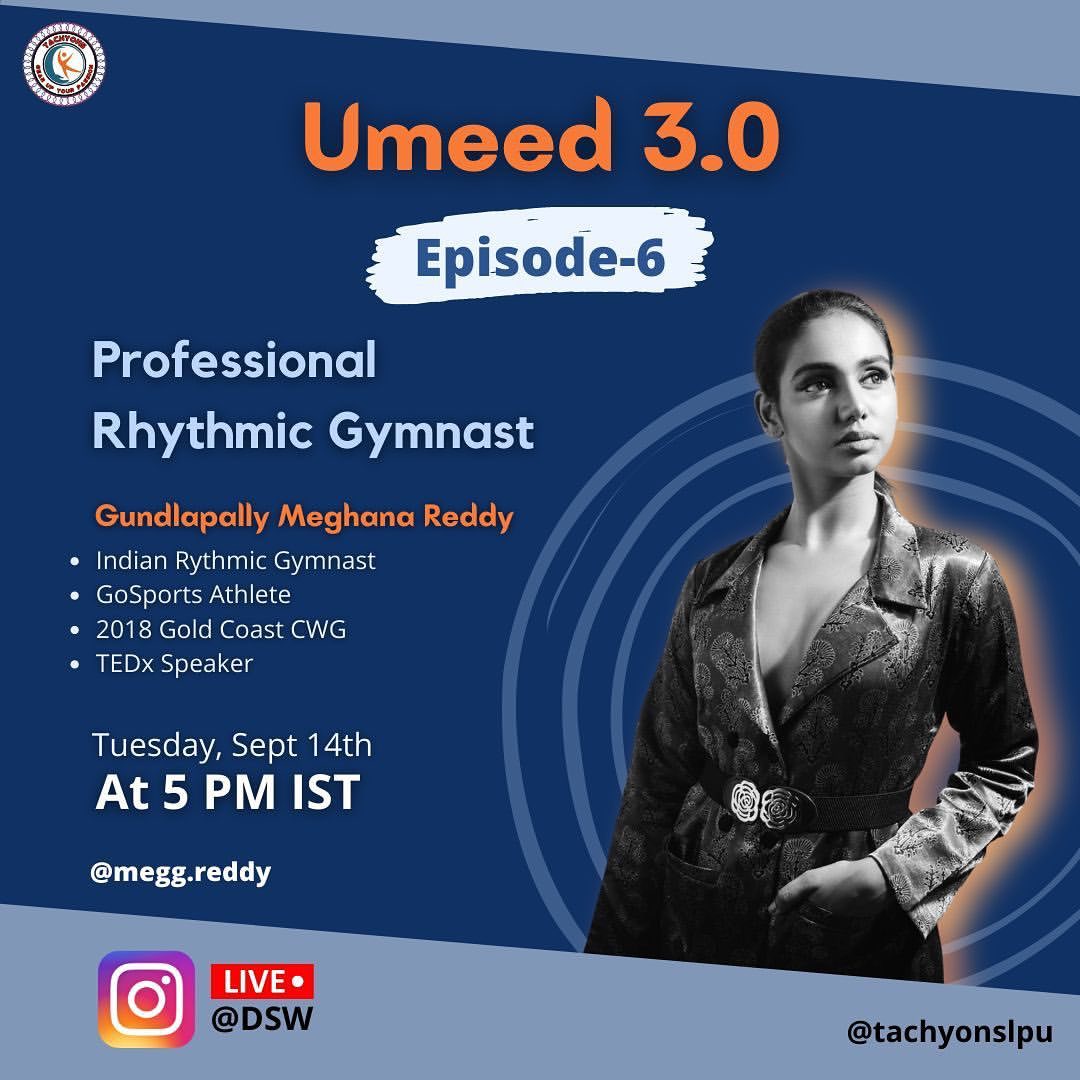 Here we are with another condensation of the 6th episode of Umeed 3.0, an event organised by LPU’s student organisation, Tachyons, hosted by the division of student welfare. As we all know Lovely professional university, never ceases to call upon interaction among the famous personalities and providing us with a glimpse of the hard work that they have done which incites everyone to put nearly the same number of effort.

In the 6th episode, we have had an amazing opportunity to interact with none other than the renowned gymnast, Ms Meghna Reddy Gundlapally. She is a Go Sports athlete, India’s most recognised Rhythmic Gymnast and a Ted-ex speaker as well.

She is carrying off impressively in rhythmic gymnastics, which is a women-dominated sport, in which gymnasts perform on a floor with an apparatus, which includes a hoop, balls, clubs, ribbon or rope. It combines various elements of gymnastics, and in addition it includes dance and calisthenics. She became the primary Indian to qualify for the Gold Coast Commonwealth Games in Australia. Also in Jan 2020, Meghana bagged a gold within the 5th Friendly International Tournament which concluded at Del Mare in Italy.

In the interview, she said that she realised at a very young age that rhythmic gymnastics was her passion. This was a mutual contribution of her family’s broad-mindedness and their support plus the efforts of all the people who taught her the art including her coach and some seniors. “I am inspired by my family of course, along with that, people who think of achieving something and end up doing so motivate me a lot” she said. People who achieve what they were supposed to despite the backlashes were here constant source for driving motivation. “I meet a lot of such people in my daily life. Those are the people who really inspire me to keep going and to keep pushing myself”, the gymnast added.

We are able to do the impossible only if we are able to express ourselves freely. In the interview, she told us about the role-play of Commonwealth games in making her take this sport. She mentioned a turning point, which was back in 2014 when she could not get into the team for the Commonwealth game which motivated her the most to work as hard as possible to get into the team. On being asked about dealing with negativity the gymnast said that she takes them constructively and works on her negative points which eventually will make her a better person.

She told us about the lessons she learned in her journey, one of them being not letting anyone decide what you are/are not capable of, because it is you alone who knows about your weakness and strengths. So never ever let anyone do that for you. The gymnast told about her dream of getting Gold for India. And how she is working hard to realize that. She played a major role in making India a good competition in the sport of Rhythmic Gymnastics. And that is a big deal! She signed off by saying that if one is really passionate about something, then he/she should do that, without any doubt. Because it is you who know who you really are, and no one else.