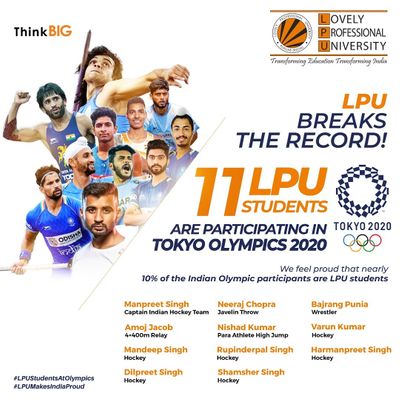 The moment that has stunned every Indian and made our chests swell with pride with tears in our eyes was delivered to us by an LPU student Neeraj Chopra, a Javelin Throw athlete who bragged a GOLD MEDAL for India at the Tokyo Olympics 2020 after 121 years! We are still in shock and numbed by the exhilarating and miraculous performance thrown by this LPU student who not only made us but the whole of INDIA proud!

Without getting any more carried away, let’s appreciate all the athletes who participated in the Olympics for India and especially the 11 LPU students who brought glory to us by 1 gold and 8 bronze medals! The students namely-

First, we witnessed our Hockey Team making a comeback and bragging a Bronze after winning against Germany and losing against Belgium in the semi-finals. The 41 years–long wait for a medal in hockey was made worth it by the 11 hockey team players out of which 7 were from LPU creating an amazing history and bringing back medal after a podium finish!

Even that wasn’t enough as history had to witness another moment of pride from the LPU students claiming back-to-back medals in a single day making us absolutely speechless!

On 7th August 2021, just a day before Olympics ends, India won two medals; Bronze in wrestling by Bajrang Punia and Gold in Javelin throw by Neeraj Chopra. The fact that both of them are students of LPU is a moment of gratification and pleasure for us. Bajrang Punia won against Daulet Niyazbekov (Kazakhstan) in 65 kg men’s wrestling with sheer dominance (8-0) to give us a Bronze medal after losing in the semi-finals.

The utter history was made by our very own Neeraj Chopra achieving an impossible Gold medal with a giant throw of 87.58 m in the second attempt giving us a Gold after 13 years and the first in athletics after 121 years! He allowed us the smile and cry at the same time with the immeasurable emotions pouring in the faces of every Indian; it was rather a very emotional as well as a moment of huge pride for us!

The Indian 4×400 m relay race has broken the Asian record to finish 4th and missing the finals by a position. The team constituted of an LPU student Amoj Jacob who being the youngest of all, tried his best! A big cheer for these guys too!

Apart from these 9 LPU students, Mirabai Chanu (Silver), PV Sindhu (Bronze), Lovlina Borgohain (Bronze), and Ravi Kumar (Silver) have provided us glory by winning medals in the Olympics and making the nation proud!